On Monday, November 21st, Diesel, A Bookstore in Oakland welcomes legendary photographer Annie Leibovitz to the store to sign her new book of photographs, Pilgrimage. The photographs in Pilgrimage took Leibovitz to places that she could explore with no agenda. Starting with Emily Dickinson’s house in Amherst, Massachussetts, she worked outward, traveling from Niagara Falls, to Yosemite, to the English countryside and even further afield. Filled with images of incredible beauty, Pilgrimage is a deeply personal collection from one of the world's foremost photographers.

Leibovitz's large and distinguished body of work encompasses some of the most well-known portraits of our time. She began her career as a photojournalist for Rolling Stone in 1970, while still a student, and by  the time she left the magazine ten years later she had shot 142 covers and published photo-essays on scores of subjects. In 1983, when she joined the staff of the revived Vanity Fair, she was established as the foremost rock music photographer and an astute documentarian of the social landscape. She has received numerous awards and honors, was decorated a Commandeur in the Ordre des Arts et des Lettres by the French government, and was named a Living Legend by the Library of Congress. She lives in New York with her three children. 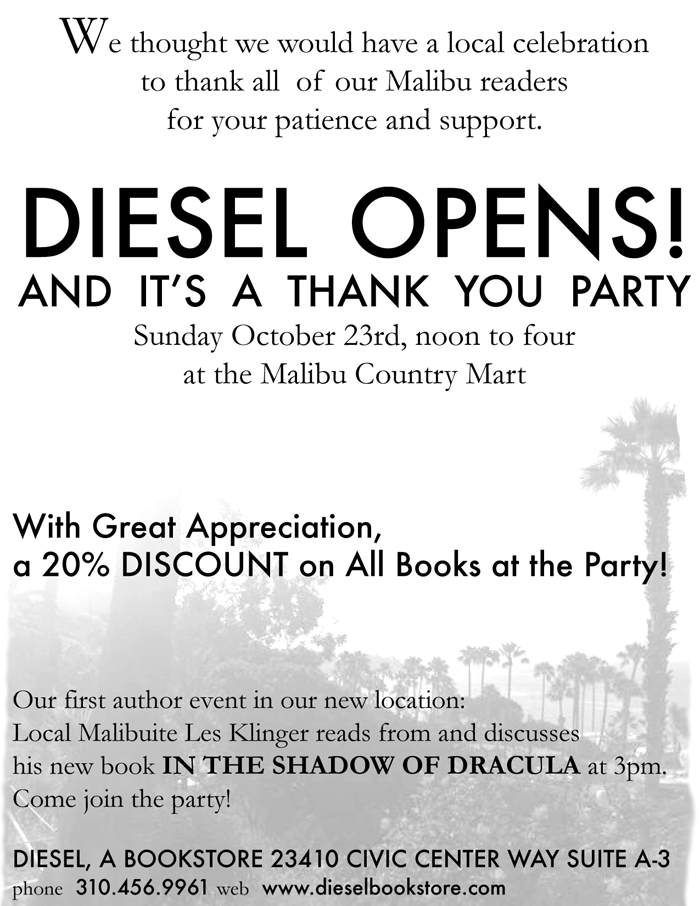 Today is the final day of Banned Books Week and we hope you all had a chance to celebrate. Last night we had a read-out in our Oakland store. People read from Candide and Harry Potter and Beloved and The Catcher in the Rye--great books that we couldn't do without.

Diesel has also been participating in the nation-wide festivities by uploading videos to the Banned Books Week channel:

1. This week (Sept. 24- Oct. 1) is Banned Books Week! Join the Virtual Read-out, the centerpiece of this year's Banned Books celebration. Record a video of yourself reading from your favorite banned or challenged book and upload it to the Banned Books Week channel.

2. Not sure what to read? Take your time, slowly sift through your collection until you find the perfect passage...
3. And once you've got that influential text, just read from the heart. And don't forget to upload your video to the Banned Books Week channel!
Body:
Say Yes To Gay YA

We are published authors who co-wrote a post-apocalyptic young adult novel. When we set out to find an agent for it, we expected to get some rejections. But we never expected to be offered representation… on the condition that we make a gay character straight, or cut him out altogether.

Our novel, Stranger, has five viewpoint characters; one, Yuki Nakamura, is gay and has a boyfriend. Yuki’s romance, like the heterosexual ones in the novel, involves nothing more explicit than kissing.

An agent from a major agency, one which represents a bestselling YA novel in the same genre as ours, called us.

Read the rest of the article in Publishers Weekly HERE

I am appalled and saddened by this article although I shouldn't be surprised, I've known for a long time that I inhabit a bubble where social justice matters. As the book buyer for teen fiction for the Diesel bookstores I consider it a plus when the publisher rep tells me there is a positive LGBT point of view in the story, better yet one of the main characters. This will cause me to give a second look to a title I might otherwise have passed.  There is a link in the article to a decent list of YA Fantasy & Science Fiction with LBGT POV that I have posted at the Oakland store.

I must say these issues are far more troubling to me than the general state of the book industry. What kind of industry are we trying to save if a stranglehold is put on open-mindedness and diversity.