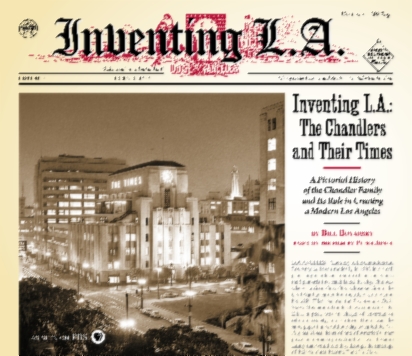 Diesel, A Bookstore in Brentwood is pleased to host an evening with Angel City Press author Bill Boyarsky in celebration of the publication of his beautiful new book, Inventing L.A.: The Chandlers and Their Times, on Thursday, October 8 at 7 p.m.

In 1882, when General Harrison Gray Otis began working for the paper that was to become the Los Angeles Times, the city of Los Angeles was still a sleepy little town with fewer than a hundred thousand residents. However, Otis was the first of a dynasty of men to build what would later become a world-renowned and award-winning newspaper. Created as the companion book to the Peter Jones Productions documentary film, this book tells the century-long story of the most famous family and their dominion over the Times, as they worked to create a city of international fame.

Inventing L.A.: The Chandlers and Their Times is the tale of the Chandlers' reign over Los Angeles with the help of their mighty scepter, the Times, and their entwinement with politics, family feud, and fortune. This is truly the story of the building of one of the most famous, populated, and culturally rich cities in the world.


The documentary premieres on PBS Oct 5.

Inventing L.A.: The Chandlers and Their Times (Hardcover)