BRENTWOOD - Ken Jennings discusses and signs "Because I Said So!" 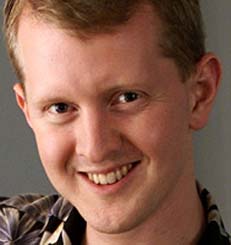 Diesel, A Bookstore in Brentwood welcomes author Ken Jennings to the store to discuss and sign his new book, Because I Said So!: The Truth Behind the Myths, Tales, and Warnings Every Generation Passes Down to Its Kids, on Wednesday, January 16th at 7pm.

"Don't cross your eyes or they'll stay like that!"

"Feed a cold, starve a fever!"

"Don't touch your Halloween candy until we get it checked out!"

"Don't look in the microwave while it's running!"

"This will go down on your permanent record."

Is any of it true? If so, how true?  Because I Said So! reminds us that mother and father didn't always know best.  Ken Jennings tirelessly grapples with over a hundred time-honored parental clichés, separating fact from myth in important matters like the swallowing of gum, the cracking of knuckles, and the catching of colds.

"Because I Said So! could be a dangerous book if it falls into the wrong hands—namely your kids'. So buy this book, read it, and then hide it away!" —Ken Denmead, author of Geek Dad

Ken Jennings broke game show records in 2004 with his unprecedented seventy-four game, $2.52 million victory streak on Jeopardy!.  Jennings's book Brainiac, about his Jeopardy! adventures, was a critically acclaimed New York Times bestseller, as was his follow-up, Maphead. He is also the author of Ken Jennings's Trivia Almanac. He lives in Washington with his wife, Mindy, his son, Dylan, his daughter, Caitlin, and a deeply unstable Labrador retriever named Banjo.

Because I Said So!: The Truth Behind the Myths, Tales, and Warnings Every Generation Passes Down to Its Kids (Hardcover)