Charlie Lovett discusses and signs "The Lost Book of the Grail" 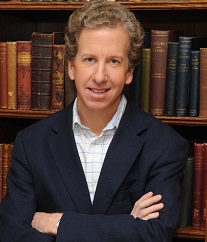 DIESEL, A Bookstore in Brentwood welcomes Charlie Lovett to the store to discuss and sign his novel, The Lost Book of the Grail on Sunday, November 5th at 3:00 pm.

Arthur Prescott is happiest when surrounded by the ancient books and manuscripts of the Barchester Cathedral library. Increasingly, he feels like a fish out of water among the concrete buildings of the University of Barchester, where he works as an English professor. His one respite is his time spent nestled in the library, nurturing his secret obsession with the Holy Grail and researching his perennially unfinished guidebook to the medieval cathedral.
When a beautiful young American named Bethany Davis arrives in Barchester charged with the task of digitizing the library's manuscripts, Arthur's tranquility is broken. Appalled by the threat modern technology poses to the library he loves, he sets out to thwart Bethany, only to find in her a kindred spirit with a similar love for knowledge and books--and a fellow Grail fanatic.
Bethany soon joins Arthur in a quest to find the lost Book of Ewolda, the ancient manuscript telling the story of the cathedral's founder. When the future of the cathedral itself is threatened, Arthur and Bethany's search takes on grave importance, leading the pair to discover secrets about the cathedral, the Grail, and about themselves.

Charlie Lovett is a former antiquarian bookseller, an avid book collector, and a member of The Grolier Club, the oldest and largest club for bibliophiles in North America. He is the author of The Bookman's Tale, First Impressions, and The Further Adventures of Ebenezer Scrooge. In 2015, Lovett curated Alice Live!, a major exhibition of Lewis Carroll and Alice memorabilia at the New York Public Library for Performing Arts at Lincoln Center, as well as writing a new introduction for Penguin Classics' 150th anniversary edition of Alice's Adventures in Wonderland and Through the Looking-Glass. He and his wife split their time between Winston-Salem, North Carolina, and Kingham, Oxfordshire, in England.

The Lost Book of the Grail: A Novel (Hardcover)