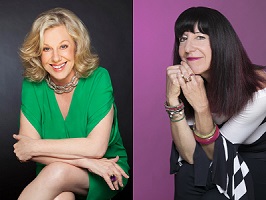 The luncheon will be held at the wonderful Amici Brentwood, conveniently located a half a block from the bookstore at 2538 San Vicente Blvd. There is ticketed parking available at the restaurant or unlimited free parking along most of San Vicente Blvd. past 26th St. (please read the street signs as there is street cleaning on one side of the street on Friday afternoons). The cost for this special luncheon duo with Erica Jong and Kim Dower is $85, which includes a copy of each of the books. Please contact the store at 310-576-9960 to purchase tickets.

Judy Collins offers this emphatic review of Erica Jong's collection of poetry, The World Began with Yes: "Erica Jong's new book of poetry is inspiring, uplifting, exciting, stimulating, engrossing--piercing. These new poems of Erica's light up the page with tears and shouts, with wounds and exclamations, with yes, yes! That is it, that is what I feel, what I imagined, what I dreamed. Ms. Jong says she culled these poems from those she has written over the last decades, poems whose writing keeps her alive. That is what poetry is for, to keep us alive, to wake us up!! Erica has done that for me again today, kept me alive, breathing, weeping, shouting at the page, "Yes!!" This is what it takes to make a poem, to make a life. Right on the money, right on the edge, right on the heart, right on the breath, The World Began With Yes is the real deal."

Get it and read it. You need it. We all need it. In this time of agitation and fear, you will fly with Erica Jong--she brings us back to what matters--the heart, the mind, the head, the imagination--the "Yes" of life." --Judy Collins

Kim Dower says, "A forever fan and devoted student of Erica Jong's poetry, her work has inspired me for as long as I can remember. Her newest book simmers with passion, wisdom, and joy. Enter her "red forest of love" and drink the poetry of Erica Jong--each poem ripe with life, each one a kiss, a slap awake, an embrace, a memory and reminder that lust, longing, and desire are the architects of love. Erica tells us, "plenty & poetry" are all we need, and here we have it--a "climax of language, like lovemaking, bringing peace." Say "yes," to this collection and let the world begin." --Kim Dower, Poet Laureate of West Hollywood

To hear more about Erica and her poetry, take a peek at Kim Dower's interview with her for the Los Angeles Review of Books.

In Kim Dower's fourth collection, Sunbathing on Tyrone Power's Grave, death has never felt so alive! Alluring titles to haunting last lines, the poems in Dower's fourth collection soothe, terrify, and always surprise, revealing the extraordinary within the ordinary. Acclaimed for combining the accessible and profound, humor and heartache, Dower's poetry continues to be quirky, dark, sexy, disarmingly candid, and moving, and here she explores the landscape of death and its intersections with love, longing, obsession, sadness, joy, and beauty. Wise and soaring, these poems bravely imagine another life beyond the one we all know, where even the angels surrounding the graves are wearing bikinis, smoking Kool Lights. For a sneak peek of one of Kim's new poems, Thirst, you can read it on The Writer's Almanac with Garrison Keillor.

Richard Blanco, Presidential Inaugural Poet says, “Kim Dower’s poems speak not of the highs and lows, but about the grey space between tragedy and tenderness, memory and loss, fragility and perseverance— that space where the soul and the truest self live.”

Erica Jong is a celebrated poet, novelist & essayist with over twenty-five published books that have been influential all over the world. Her most popular novel, Fear of Flying, celebrated its 40th anniversary in 2013. Never out of print, it has sold over thirty-five million copies in forty-two languages including Chinese and Arabic. Her awards include the Fernanda Pivano Award for Literature in Italy (named for the critic who introduced Ernest Hemingway, Allen Ginsberg, and Erica Jong to the Italian public), the Sigmund Freud Award in Italy, the Deauville Literary Award in France, the United Nations Award for Excellence in Literature, and Poetry Magazine's Bess Hokin Prize. Erica's poetry has appeared in publications worldwide, including The New Yorker, L.A. Times, The Paris Review, Haaretz, and many more. Erica lives in New York and Connecticut with her husband and two poodles.

Kim Dower, originally from New York City, received a BFA in Creative Writing from Emerson College, where she also taught creative writing. She has published three collections of poetry, all from Red Hen Press: Air Kissing on Mars which was on the Poetry Foundation's Contemporary Best Sellers list, Slice of Moon, and Last Train to the Missing Planet. Kim's work has been nominated for two Pushcart Prize and has been featured in the Academy of American Poets' Poem-A-Day, Garrison Keillor's The Writer's Almanac, and Ted Kooser's American Life in Poetry, as well as in Ploughshares, Barrow Street, Rattle, and Eclipse. Her poems are included in several anthologies, including, Wide Awake: Poets of Los Angeles and Beyond and Coiled Serpent: Poets Arising from the Cultural Quakes & Shifts of Los Angeles. She teaches Poetry and Dreaming in the B.A. Program of Antioch University. Kim was City Poet Laureate of West Hollywood, California from October 2016--October 2018.

The World Began with Yes (Paperback)