Larkspur - Helen Heitkamp discusses and signs "Larkspur Past and Present" 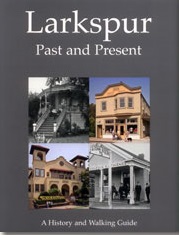 Diesel, A Bookstore in Larkspur welcomes Helen Heitkamp to discuss and sign Larkspur Past and Present on Saturday, November 16th at 3pm.

Some of you may remember the old, demolished Hutchinson's Rock Quarry, which was the site of the final scenes of the 1971 film Dirty Harry, shortly before its conversion to the Larkspur Ferry Terminal and the Marin Country Mart. Far fewer of you may remember that Larkspur's Baltimore Canyon was the home of one California's first ten-pin bowling alleys in the early 1850s (hey, you never know). But whether you're interested in reminiscing or whether you want to learn Larkpur's rich history and lore for the first time, we have just the book for you: Larkspur Past and Present. This beautiful book is filled fascinating stories and surprising facts of Larkspur life, more than 600 historical photos, and clear and detailed maps for walking explorations.

The two primary authors of this book are Helen Heitkamp and Richard Cunningham, but this book was truly a local, group effort. More than 100 people contributed thousands of hours of volunteer research, writing, and photography to create the updated Larkspur Past and Present. Members of the team included book and graphics designers; journalists; editors; legal, marketing, cartography and financial experts; photographers, and educators.
Event date:
Saturday, November 16, 2013 - 3:00pm
Event address:
Diesel, A Bookstore in Larkspur
Marin Country Mart, 2419 Larskspur Landing Circle
94939 Larkspur
us