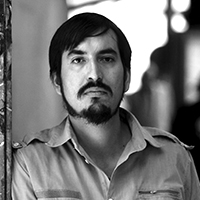 DIESEL, A Bookstore in Oakland welcomes Carlos Labbé  to the store to discuss and sign his new literary detective novel, Loquela, on Saturday, January 16th at 7:00pm. Joining him in conversation will be the translator, Will Vanderhyden.

Loquela, Carlos Labbé’s fourth novel and second to be translated into English, is a narrative chameleon, a shape-shifting exploration of fiction’s possibilities. At a basic level, this book is like a hybrid of Julio Cortázar and Paul Auster: a distorted detective novel, a love story, and a radical statement about narrative art. Behind the silence that unites and separates Carlos and Elisa, behind the game that estranges the albino girls, Alicia and Violeta, from the best summer afternoons, behind the destiny of Neutria—a city that disappears with childhood and returns with desire—and behind a literary movement that might be the ultimate vanguard while at the same time the greatest falsification, questions arise concerning who truly writes for whom in a novel—the author or the reader.

Through an array of voices, overlapping story­lines, a kaleidoscope of literary references, and a delirious prose, Labbé carves out a space for himself among such form-defying Latin American greats as Diamela Eltit, Juan Carlos Onetti, and Jorge Luis Borges.

Carlos Labbé, one of Granta’s “Best Young Spanish-Language Novelists,” was born in Chile and is the author of five novels—including Navidad & Matanza, and a collection of short stories. In addition to his writings, he is a musician and has released four albums. He is a co-editor at Sangría, a publishing house based in Santiago and Brooklyn. He also writes literary essays, the most notable ones on Juan Carlos Onetti, Diamela Eltit, and Roberto Bolaño.

Will Vanderhyden received an MA in Literary Translation from the University of Rochester. He has translated fiction by Carlos Labbé, Edgardo Cozarinsky, Alfredo Bryce Echenique, Juan Marsé, Rafael Sanchez Ferlosio, and Elvio Gandolfo. He was the recent recipient of a fellowship from the National Endowment for the Arts for his work on Rodrigo Fresan, which also earned him a Lannan residency in Marfa, TX.