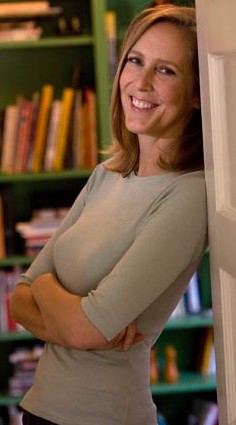 Diesel, A Bookstore in Brentwood is very excited to welcome Mary Roach back to the store to discuss and sign her new book Packing for Mars: The Curious Science of Life in the Void, an exploration of the irresistibly strange universe of space travel and life without gravity, on Thursday, August 26 at 7pm.

Here's Mary in her own words:

"I grew up in a small house in Etna, New Hampshire. My dad was 65 when I was born. My neighbors taught me how to drive a Skidoo and shoot a rifle, though I never made much use of these skills. I graduated from Wesleyan in 1981, and drove out to San Francisco with some friends. I spent a few years working as a freelance copy editor before landing a half-time PR job at the SF Zoo. My office was in a trailer next to Gorilla World. On the days when I wasn't taking calls about elephant wart removal surgery or denying rumors that the cheetahs had been sucked dry by fleas, I wrote freelance articles for the local newspaper's Sunday magazine. Eventually, my editors there moved on to bigger things and took me along with them.

"I mostly write books these days, but I still write the occasional magazine piece. These have run in Outside, National Geographic, New Scientist, Wired, and The New York Times Magazine, as well as many others too embarrassing to name. A 1995 article of mine called "How to Win at Germ Warfare" was a National Magazine Award Finalist, and in 1996, my article on earthquake-proof bamboo houses took the Engineering Journalism Award in the general interest magazine category, for which I was, let's be honest, the only entrant. I often write about science, though I don't have a science degree and must fake my way through interviews with experts I can't understand. I also review books for The New York Times."

Packing for Mars: The Curious Science of Life in the Void (Hardcover)

Bonk: The Curious Coupling of Science and Sex (Paperback)