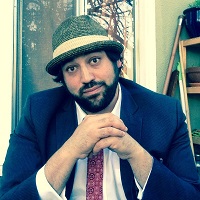 Diesel, A Bookstore in Oakland welcomes Samuel Sattin to the store to discuss and sign The Silent End, on Tuesday, September 15th at 6:30pm. Joing him in conversation will be Michelle Wallace.

In a mist-covered town in the Pacific Northwest three teenagers find themselves pitted against an unearthly menace that dwells beneath the foundations of their high school… Nathaniel Eberstark is an outcast, but not by choice. His mother disappeared after a long battle with depression and his father is seen as the local nut, running around town in the middle of night hunting beasts no one else can see with his constant companion, a mysterious man known only as the Hat.

On Halloween night all comes to a head. Eberstark, alongside his only friends Lexi and Gus, discover something that challenges his father’s apparent insanity: a wounded monster. Rather than stir the town into a frenzy the three friends hide the creature, their decision dragging them into a web of conspiracy, dream-logic, and death. Faced down by living trucks and mirror-dwelling psychopaths and hellish entities who lurk behind friendly faces, Eberstark, Lexi, and Gus find themselves battling to save not just themselves but the soul of their quiet little town.

Samuel Sattin is a novelist and essayist. He is the author of League of Somebodies, which Pop Matters describes as "One of the most important novels of 2013." His work has appeared in the Atlantic, Salon Magazine, io9, Kotaku, Publishing Perspectives, The Weeklings, The Rumpus, The Good Men Project, Litreactor, San Francisco Magazine, The Cobalt Review, Cent Magazine, and elsewhere. Also an illustrator, he holds an MFA in Comics from California College of the Arts and has a creative writing MFA from Mills College. He lives in Oakland, California.

Michelle Wallace has an MFA in Creative Writing from Mills College, was a San Francisco Writers' Grotto Writing Fellow, a Voices of Our Nation alum and recipient of a San Francisco Arts Commission Grant. She is a reader at Kimberly Cameron and Associates Literary Agency, founder and host of the Borderlands Lectura series, The Kaleidoscope Reading Series and member of The Drunken Goats writing group.

Copies of The Silent End will be available for sale at the event.