Sunday, November 17th at 3:00 pm - Toddy Smith and Darren Nuzzo discuss and sign "I'll Give You a Dollar if You Consider This Art" 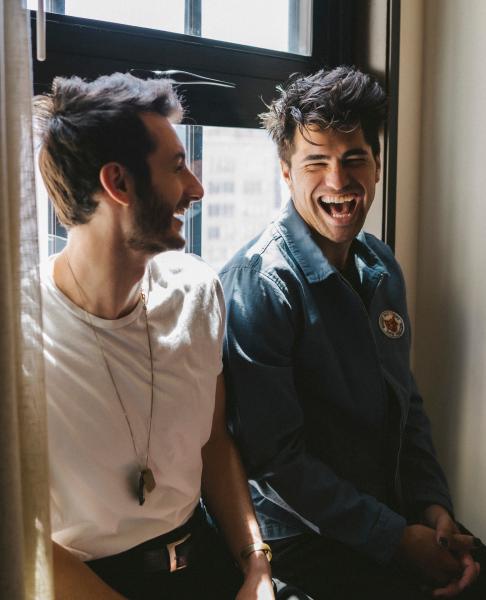 Join us on Sunday, November 17th at 3:00 pm as we welcome Toddy Smith and Darren Nuzzo to the store to discuss and sign I'll Give You a Dollar if You Consider This Art!

A mechanic milks a cow, a recluse walks outside for the first time in three weeks, two teenagers watch tennis on mute, a grown man drinks a juice box in his underwear -- all of these moments strike the artful balance between intellectual acuity and lighthearted absurdity, establishing Toddy Smith and Darren Nuzzo as the new literary voices to listen to, laugh with and follow.

At times it will feel like you’re scrolling through Twitter or two drinks in at a comedy club; other times it will feel like you’re at the public library or your local art gallery. You'll find characters you want to hug and ones you hope never to meet again. From light and humorous to sad and dark, the book captures the times we're living in now while paying respect to the works that came before.

Driven by the diary entries of best friends Toddy Smith and Darren Nuzzo, this book is the result of two old-souled writers creating art in the internet age, heavily rooted in literature, yet shaped by the 21st century.

Toddy Smith is a performer, writer and leading digital content creator (and member of the Vlog Squad) who has amassed a following of over 4 million adoring fans. Toddy uses his unique take on storytelling to share a glimpse into his and his friends' lives through vlogs and other comedic content across his social channels. Toddy has ties with Calvin Klein (ambassador of their 2019 Coachella campaign), and Smirnoff (recurring face of the brand). He has a lifestyle clothing brand, Gothic Mochas. He hopes to continue to use his platform to stop bullying while encouraging people not to take themselves too seriously, and to inspire fun.

Darren Nuzzo is a writer and performer from Southern California. His fiction work has been anthologized in esteemed literary journals and his articles have appeared in numerous University newspapers. Off the page, his stand-up routines have been seen by his continuously growing fanbase at various open mics, and the occasional lingering patron. Darren built a cult social media following through his lengthy literary captions accompanying various photos of himself. As a fitness guru, sustainability advocate, self-proclaimed wizard, and hippy at heart, Darren brings a unique outlook to his literature.

I'll Give You a Dollar If You Consider This Art: Stories, Poems, Comics, and Other Ponderables Ripped from the Diaries of Toddy Smith and Darren Nuzzo (Paperback)