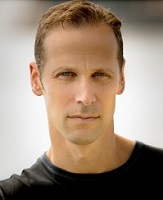 DIESEL, A Bookstore in Brentwood welcomes Gregg Hurwitz back to the store to discuss and sign the fourth book in the Orphan X series Out of the Dark: An Orphan X Novel , on Tuesday, January 29th at 6:30 pm. This will be his publication party and all are welcome to attend. Please note that this event will take place in the lower outdoor courtyard adjacent to our store.

Taken from a group home at age twelve, Evan Smoak was raised and trained as part of the Orphan Program, an off-the-books operation designed to create deniable intelligence assets--i.e. assassins. Evan was Orphan X. He broke with the Program, using everything he learned to disappear and reinvent himself as the Nowhere Man, a man who helps the truly desperate when no one else can, but now Evan's past is catching up to him.

Someone at the very highest level of government has been trying to eliminate every trace of the Orphan Program by killing all the remaining Orphans and their trainers. After Evan's mentor and the only father he ever knew was killed, he decided to strike back. His target is the man who started the Program and who is now the most heavily guarded person in the world: the President of the United States.

President Bennett knows that Orphan X is after him and, using weapons of his own, he's decided to counter-attack. Bennett activates the one man who has the skills and experience to track down and take out Orphan X--the first recruit of the Program, Orphan A.

With Evan devoting all his skills, resources, and intelligence to find a way through the layers of security that surround the President, suddenly he also has to protect himself against the deadliest of opponents. It's Orphan vs. Orphan with the future of the country--even the world--on the line.

Gregg Hurwitz is the New York Times bestselling author of more than a dozen novels, including the #1 international bestseller Orphan X. His books have been shortlisted for numerous literary awards, graced top ten lists, and have been translated into twenty-eight languages. He is also a New York Times bestselling comic book writer, having penned stories for Marvel (Wolverine, The Punisher) and DC (Batman). Additionally, he's written screenplays for many major studios and written, developed, and produced television for various networks. Hurwitz resides in Los Angeles with two Rhodesian ridgebacks.

Out of the Dark: An Orphan X Novel (Hardcover)