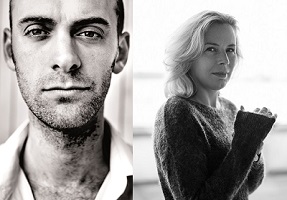 DIESEL, A Bookstore is pleased to host the US publishing launch event for World Editions. Christine Swedowsky, U.S. director of World Editions, will be here to present the titles in their collection along with Judith Uyterlinde, the Amsterdam publisher, and two of their featured Dutch authors, Jaap Robben and Esther Gerritsen, who will discuss and sign their acclaimed work. Please note that this event will take place in the lower outdoor courtyard adjacent to our store.

Colm Tóibín said of Jaap Robben’s new novel: - "You Have Me to Love is an intense and dramatic novel filled with meticulous use of detail and a forensic psychological accuracy. Its power comes from the fierce energy of the narrative structure, the way of handling silence and pain, and the ability to confront the darkest areas of experience with clear-eyed sympathy and care. Jaap Robben handles delicate, dangerous material with subtlety and sympathy, but also with a visionary sense of truth that is masterly and unforgettable."

Mikael lives with his parents on an island somewhere between Scotland and Norway. One day Mikael's father saves him from drowning in the ocean, but is himself thrown against the rocks by a wave and disappears under water. In shock and unable to speak, Mikael blocks out the memory of what took place, silently joining his mother in the search for his missing father. As Mikael's mother realizes her husband has drowned, the relationship between her and Mikael transforms: she slowly starts to unravel, forcing the son to replace his father in every possible way.

Jaap Robben is a popular Dutch poet, playwright, actor, and children's author. You Have Me to Love is his first novel. It received glowing reviews in the Dutch press and won the prize for the best Dutch debut novel and the 2014 Dutch Booksellers Award.

"Cool, sparse, and delicious, Esther Gerritsen's Craving hits all the right notes,” wrote Alice Sebold, author of The Lovely Bones. “This is an author who is unafraid of both complex characters and complex emotion (Thank God!)."

Elisabeth is dying. Coco jumps at this chance to prove her love and promptly moves in with her deteriorating mother, a venture that quickly sends both parties spiraling out of control. Alongside a supporting cast of ex-bosses, ex-husbands, and (soon to be ex) boyfriends, the two women attempt to work through the annals of their dark yet often wildly humorous relationship. Psychologically astute and eye-poppingly candid, this is a tale about both excess and denial in which some things perhaps would have been better left unspoken. Sometimes the only person who understands you in this world is your hairdresser.

Gerritsen's sparse and lucid prose chime with the absurdist logic and melancholy wit of characters as true as they are ridiculous.

Esther Gerritsen is a Dutch novelist, columnist, and playwright. She is one of the most established, widely read, and highly praised authors in the Netherlands, and makes regular appearances on radio and at literary festivals. In 2014 she was awarded the Frans Kellendonk Prize for her oeuvre.

Christine Swedowsky is the US Director for World Editions publishers. World Editions has offices in New York, London and Amsterdam and is dedicated to bringing American readers the best literature other countries have to offer in translation.

You Have Me to Love (Paperback)