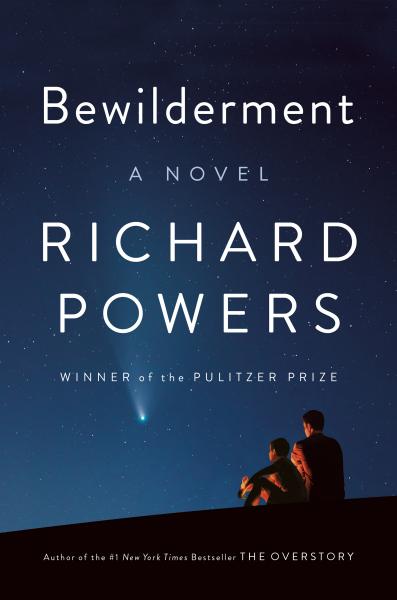 Thursday, September 23rd at 6:00 pm, Point Reyes Books, in conjunction with DIESEL, a Bookstore and Vroman's Bookstore, present Richard Powers, who will discuss Bewilderment (W.W. Norton), his highly anticipated follow-up to his Pulitzer Prize winning The Overstory. Richard Powers will be joined in conversation by Karen Joy Fowler.

This is a free event, though we encourage you to pay what you can or to order the book from one of the participating bookstores: DIESEL, Vroman's, and Point Reyes Books.

The astrobiologist Theo Byrne searches for life throughout the cosmos while single-handedly raising his unusual nine-year-old, Robin, following the death of his wife. Robin is a warm, kind boy who spends hours painting elaborate pictures of endangered animals. He’s also about to be expelled from third grade for smashing his friend in the face. As his son grows more troubled, Theo hopes to keep him off psychoactive drugs. He learns of an experimental neurofeedback treatment to bolster Robin’s emotional control, one that involves training the boy on the recorded patterns of his mother’s brain…

With its soaring descriptions of the natural world, its tantalizing vision of life beyond, and its account of a father and son’s ferocious love, Bewilderment marks Richard Powers’s most intimate and moving novel. At its heart lies the question: How can we tell our children the truth about this beautiful, imperiled planet?

Richard Powers has published thirteen novels. He is a MacArthur Fellow and received the National Book Award. His most recent book, The Overstory, won the Pulitzer Prize in Fiction. He lives in the Great Smoky Mountains.

Karen Joy Fowler is the New York Times bestselling author of six novels, including The Jane Austen Book Club and We Are All Completely Beside Ourselves, which was the winner of the PEN/Faulkner Award and shortlisted for the Man Booker Prize. She lives in Santa Cruz, California.